This Season Pass gives you:
All items will be released during the next months, over the course of 8 DLC packs.

This Season Pass 2 gives you access to 12 additional cars, released over the course of 4 DLC Car Packs.

The first DLC "Getaway Car Pack" is out now, with a new car pack being released approximately every 2 months.

Break the rules and take full-contact racing to the limit with Wreckfest!

Expect epic crashes, neck-to-neck fights over the finish line and brand-new ways for metal to bend – These are the once-in-a-lifetime moments that can only be achieved in Wreckfest, with its true-to-life physics simulation crafted by legendary developer Bugbear, who also brought you FlatOut 1 & 2!

Burn rubber and shred metal in the ultimate driving playground!

Wreckfest is jam-packed with upgrade and customization options. Whether you are preparing for your next demolition derby with reinforced bumpers, roll cages, side protectors and much more, or setting your car up for a banger race with engine performance parts like air filters, camshafts, fuel systems, etc., Wreckfest is shaping up to be the best combative motorsport game out there.

Exhilarating no-rules racing action with defining, once-in-a-lifetime moments that can be achieved only with a true-to-life physics simulation. Witness insane neck-to-neck fighting on high-speed circuits, face total destruction madness on crazy courses with intersections and oncoming traffic, or go for demolition dominance in derby arenas.

Our cars are old, banged up, patched together... They ooze style and character! From old American heavy-hitters to agile Europeans and fun Asians, you won’t find anything like this in other games.

Change not only the look of your cars but also upgrade their body armor – Reinforce them with heavy iron that protects you from damage, but also adds weight, which impacts the cars handling. Modify your car to make a robust tank or a fragile but lightning-fast rocket, or anything in between!

Wreck your friends online and take racing to the limit while chasing for demolition dominance!

Have hilarious fun with lawn mowers and upon release also with crop harvesters, school buses, three-wheelers and more! 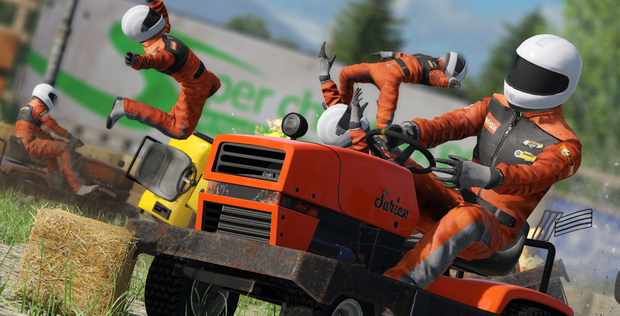 Want to go completely nuts? Have a look at the Steam Workshop where you'll find a huge selection of mods that add monster trucks, tracks with moon-high jumps or even classic maps from famous destruction-themed games!