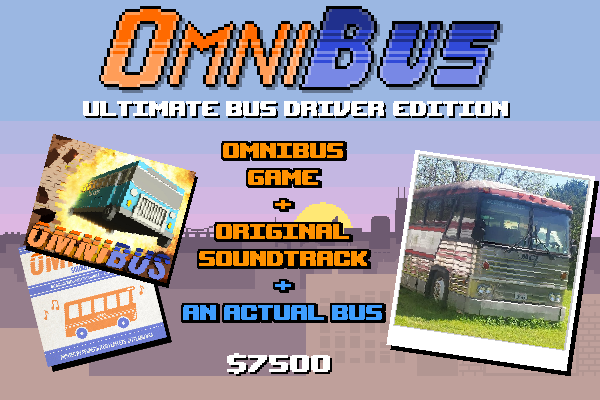 The OmniBus Ultimate Bus Driver Edition is real and is limited to one. Get OmniBus: Game of the Year Edition, the OmniBus original soundtrack, and a 1977 MCI Charter Bus all for the low price of $7500. Serious inquiries only, must be picked up in Austin, TX. Beep, beep.

OmniBus is next-to-last gen physics game about the most powerful bus in the universe that can’t stop or even slow down for reasons incomprehensible to the simple human mind. OmniBus must complete missions at the behest of citizens as its speed increases to unsafe speeds and without landing on its head or sides. OmniBus drivers will choose from the bizarre mission mode, thrilling trick mode and versus multiplayer mode for up to four players to achieve goals, set high scores, and receive total enlightenment.

Deep Emotional Narrative: Throughout history man has looked to the noble bus in times of chaos and turmoil to bring peace, prosperity, and a lift to those that it serves during hours of operation. Slay demon buses, harvest space corn, and transport astronauts to a wedding as the legend foretold to become the one true OmniBus. There’s also a pretty cool level with a football field on the top of a skyscraper.

Multiplayer Derby Mode: Jump into the chaotic free-for-all multiplayer versus mode where drivers are pitted against each other in a high score trick mode or the visceral deathmatch mode sure to raise tensions down at the bus depot.

Free Play Trick Mode: Choose your favorite bus and pull off unbelievable jumps, flips and twists to hit incredible high scores and impress friends, family, and other OmniBus drivers on the leaderboards.

Cutting Edge Everything: OmniBus has the best of everything from graphics and sound effects to physics and an options menu. This is the future. This is OmniBus.

add to wishlist
The Blue Bus

Beat a level with Ultra Bus
The Tipsy Bus

Beat a level with Gravity Bus
Over the Moon

Complete World 3
The Round Bus

Beat a level with a wooden bus
The Athletic Bus

Beat a level with a pushy bus
Survival Story

Knock off a giant hat
End of the Road

Beat 1-4 with one trick
The Armed Bus

Get 10 hats
The Expensive Bus

Unlock a special bus
Half Millo

Get bronze medals in all story missions
Chicken Magnet

Get silver medals in all story missions
Gold Bus

Get gold medals in all story missions
Hats Forever

Get all the hats
Everything-Doer

Get gold on all levels and get every hat