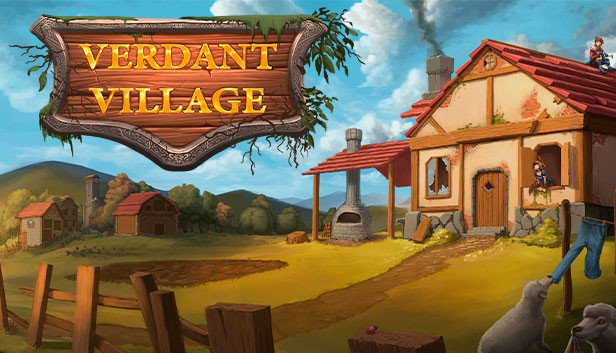 Verdant Village is a pretty fresh combination of already existing and even slightly overused genres among the indie titles, which is a blend of RPG and farming simulator. The said title, that's published and developed by a single person working as Exodus Software, might seem to be an exact clone of a popular game, Stardew Valley, at least on a first sight. But luckily, it tried to be something different, by focusing more on the RPG part of it with, while keeping the farming elements as an extra. Thanks to that, I believe it made itself noteworthy of checking out by the fans of any out of those two genres. Unfortunately, there's plenty of issues that make the game not that easy to describe as good or bad. To make it clear, Verdant Village is still an Early Access title, which means there's still a lot of work before we can fully judge the amount of bugs and error existing in-game as well as the state of current content. There's lots of empty spaces left out for upcoming content, marked with a message that 'Area is still not implemented', which clearly takes out from the experience at the present state. As it's mentioned by the developer in description, he's 'the only one person' working on the game, making it hard to estimate the full release, but he hopes it'll be done by the end of 2021, promising upgrades and new additions to the key systems that the game relies on, as well as many new things in contend, such as combat, romance system, mercenaries, sailing and few others. Time will tell what will come out of it in the final release, but I keep my fingers crossed for him since the game is nothing less than promising, even in the current state.

Starting off with gameplay and story, it's pretty straight-forward and actually pretty common. You wake up at the shore of an island with no memory, and you're found by the king himself and his daughter, a nurse. For some reason, you're instantly taken care of, given a house and an adventure goal. The game even makes fun of itself, calling out later on that it's weird that a random person that shows up out of nowhere, get a free property and everyone loves him. You go around the townsfolk, introduce yourself and get some quests from the locals, and after that it plays out as any RPG would - everything is happy and calm, build your house and garden up, specialize in a craft such as Alchemy, Mining, Fishing or few others, and do stuff for people.
That's where I'd like to move on to gameplay. The goal is pretty clear, simply become a big man and own a big land by numerous ways to increase your wealth. Cooking, fishing, mining, alchemy, brewing, hunting, archaeology or just selling things to vendors, everything can be a worthy way to achieve that. A fun thing that is slightly different from other games I've played, is that nothing stands above the rest, everything is useful, each of the jobs you take on comes with pros and cons. The thing that ensures that you will manage your time and activities properly, is Stamina, that's being used for every activity and restored by sleeping or eating food, which due to almost no endurance, will have to be a big part of each of your days. There's an ability system that as you level and progress, will increase your bearings and effectiveness, as well as improving and enhancing your tools, improving you even further.
As much as it's nice to have a variety, it heavily comes down to a very high amount of grinding. Doing same routes in order to achieve same things every day, quick stamina drain, causing you to go out to work and come back few minutes later due to running out of strength to progress. And sadly that's a thing in every part of the game, even relaxing and effortless work like fishing, which makes it highly repeatable on every front. The only thing worse than that is the current state of Quests. Each of them I've encountered is nothing but 'fetch me stuff' kind of quest, and in case it's not annoying enough, you're limited with the space in inventory to make sure it's tedious as hell. Oh, and rewards? Congrats, you spent an hour, and you're rewarded with a furniture design available to buy for your house.

Few words about technicalities now. First of, Graphics. Pretty old-school fashioned pixel graphics in the general open world, clearly inspired by NES games such as Soul Blazer, mixed with visual novel derived close-up art when talking with townsfolk. There's a lot of detailed work put into designs of humans, animals, all the nature around such as trees or waters varies depending on surroundings and buildings are not a copy of two designs pasted over the town, so that's where a huge value in graphics lies. Even more uniqueness shows in the environment when we add seasons changing and all the details that come with that, such as yellow bloom in spring, the fireflies in summer or more rains in autumn. Alas, graphics trip a bit on the shadows, nothing but a grey circle around the characters and items in game. Coming with shadows, slightly bad 3D effect in hills areas or elevated surfaces. But other than that, it's a solid work on the graphics, so can't complain too much as it's nothing that could ruin the whole game and still has a chance of being fixed before the full release.
After graphics, comes the Sounds, which are sadly lacking. No voice acting, only a typical series of beeping to imitate the moment of the words being spoken. Most of the sound effects that you encounter, like using the pickaxe, opening chests, picking up things from the ground, it's all very similar, often even the same effect used in different actions like picking up an item from the ground has the same sound as plucking the flower. Low amount of ambient noise except for crickets, frogs, flies etc., which we can't even find visually, almost nothing moves around in the world. The part that saves the sounds paragraph is definitely the music, most likely made by dev or his colleague since it's nothing super fancy or highly various, but still enlightens the game with some melodic sounds playing around as we walk through the world.

To summarize, there's plenty of work still to be done to call the game finished and polished or even saying it's highly worth to get it right now. But then again, most of the negative parts comes from the things that might, and most likely will be fixed, added or removed until the proper release. Currently, the game comes at £11.39 / €12.49 / $14.99, which seems fair to me and to Exodus as well as stated in their early access interview description and will be absolutely worth it when the game will be finished with all the upcoming content. If you're heavily into such genre or want to relax in front of the screen and kill some time, it's worth supporting the dev in their passionate project and buying their game.