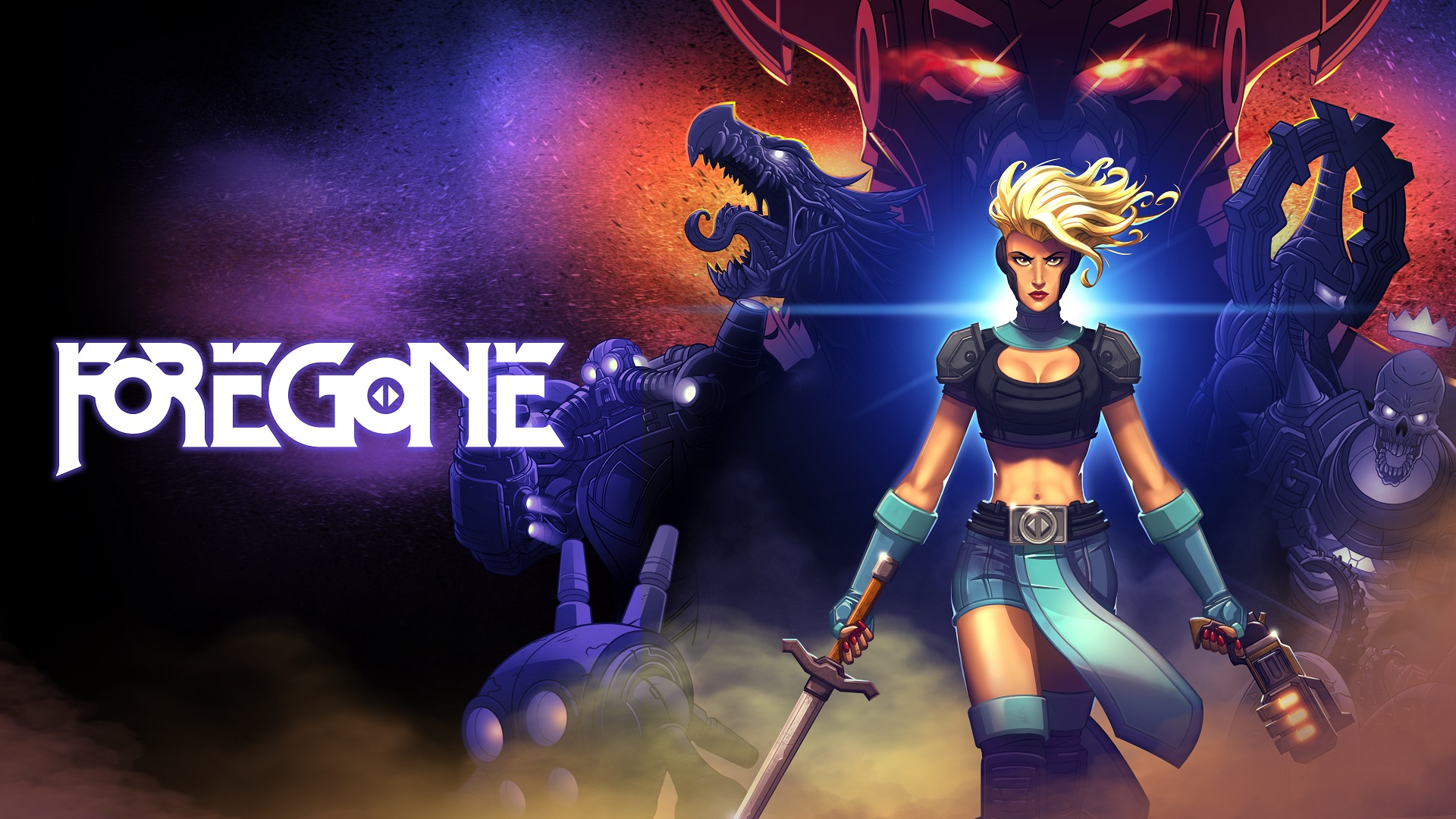 It’s easy to lose Foregone in the multitudinous examples of pixelated Metroidvania games. On paper, there isn’t much that separates it from the norm. In spite of the standard formula, Foregone carves out its own identity through an excellent gameplay loop, fluid animations and complimentary sound design. Also, the game has gun nunchucks – aptly named gunchucks – what else do I need to tell you.

The introductory level is pretty standard, with simple tutorials for jumping, attacking, dodging, hidden areas, and the like. Before long, you’ll enter a town that acts as the hub world. Located within this hub are various vendors that will take resources in exchange for upgrades, abilities and weapons. The weapon, armor and ability upgrades are fairly typical, but the character upgrades feel somewhat schizophrenic in their intention. Some offer pitiful percentage increases to damage and health, whereas others actively change the way you’ll play the game with status ailments and new mechanics. It’s a somewhat unnecessary feature to include in a game of this type, but it’s passable in offering a sense of progression. In the center of the town is a teleporter, which connects to others in the world and acts as the fast travel system.

At its core, the element that makes Foregone so much fun to play is its flow. I find many games in the genre to be rather rigid, even in the presence of responsive controls and good map design. Foregone makes great use of smooth transitional animations that make every dash, jump and swing coalesce in a satisfying way. This visual appeal does a lot to make the gameplay more engaging, and this is a strength that I have found to be missing in many games that revel in their retro, pixelated styles. Gameplay that is at first frenetic becomes smooth and receptive once you are accustomed to the movement options. It’s no Hollow Knight, but what is?

The overall audio quality suits the tone much better than I was expecting. There is a light, exploratory feel to the music for most of the standard levels, while the more bombastic boss fights naturally feel more epic. The sound effects and weapon sounds aren’t remarkable, but don’t break immersion either. Voice acting was a surprise, and it’s of good quality. 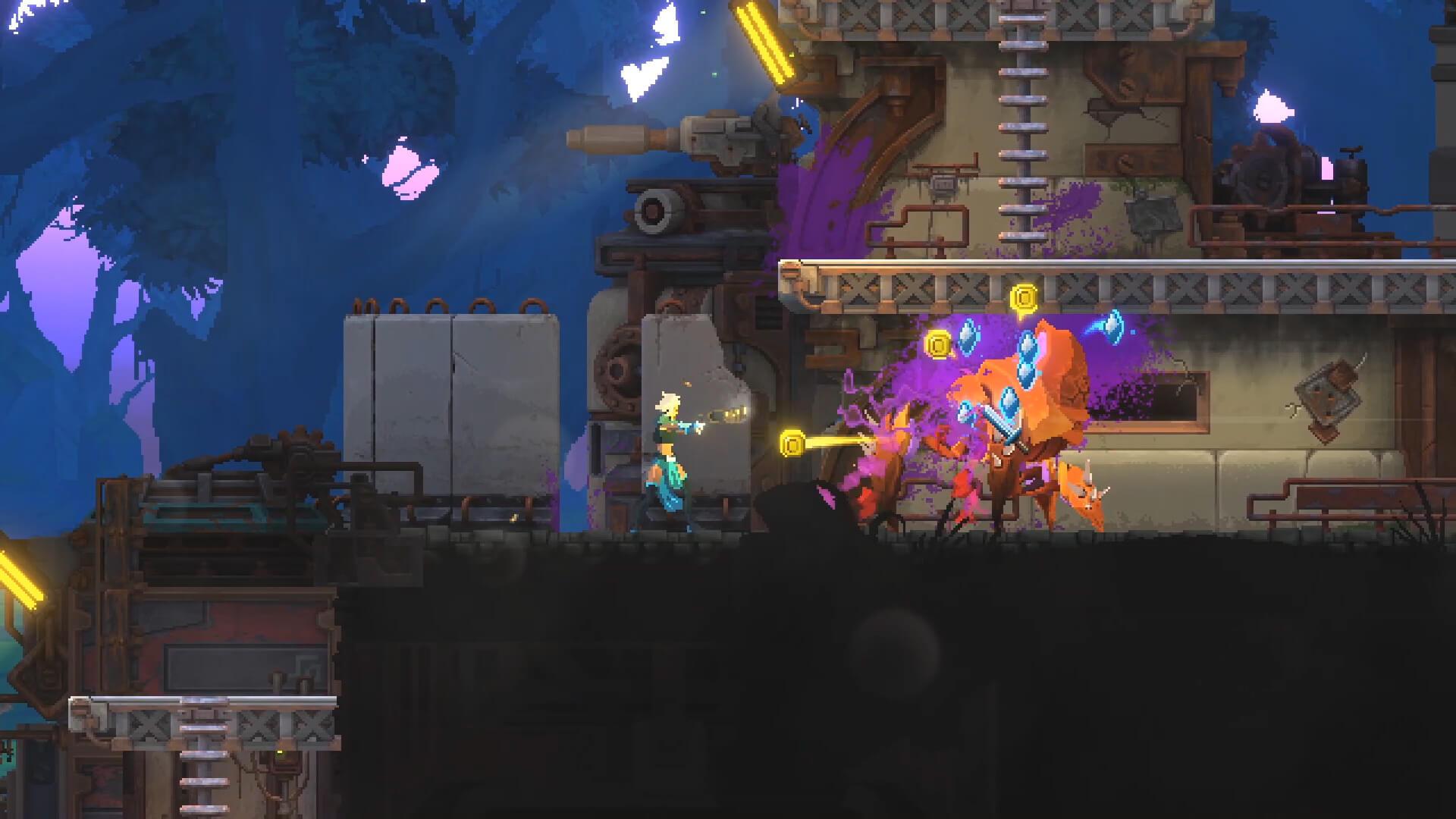 While the standard melee chains aren’t particularly complex, the variety of weapons cover most of the bases for those players who differ on prioritizing speed, power or range. The scythe remain a favourite of mine, but spears, large swords, dual blades, and the like manage to justify their existence based on personal preference. The ranged options are of the fairly standard guns and bows variety, which serve as significant and powerful options. They dispatch enemies with ease and as expected, they hold limited ammo. Unlike many games, ammo regenerates upon landing melee attacks, which allows ranged weapons to be used more consistently. This aspect of ammo abundance contributes greatly to the aforementioned flow of Foregone. I’m the type of person who hoards any limited weapons unless it’s absolutely necessary to expend them; however, the ease at which ammunition is refunded encourages heavy usage of all available options. I found myself liberally shooting, which in turn emboldens a fast pace. Much of the credit I give Foregone comes from this ability to push the playstyle that most suits its framework.

Enemy diversity could be more expansive, but like the available weapons, they succeed in covering the categories that are necessary. Some enemies are exclusively ranged or melee, while others deal in area of effect attacks. Most of the levels are structured in such a way that enemy placement feels very competently directed. At times, these employments can feel rather cheap, but for the most part, the design is solid. Bosses follow standard patterns for the most part, but they stand out in large part because of their visual design. Much like the player character, the bosses have been crafted with care, particularly in the animation department. 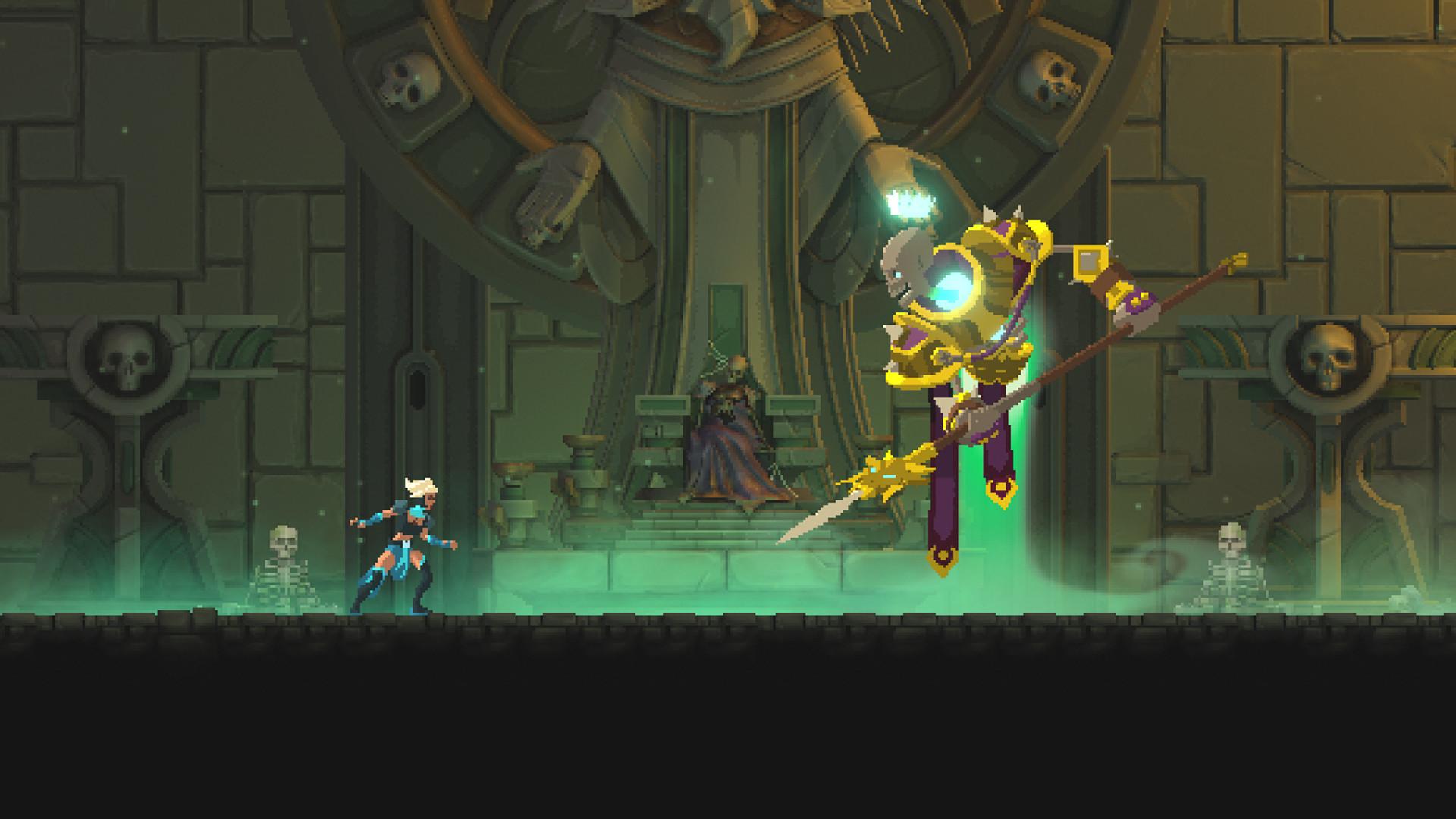 Upon dying, you will return to town. From there, you are given the option to automatically retrieve half of your resources at the expense of the other half.  In return for greater risk of loss, your dropped assets can be picked up where you last died. It’s reminiscent of the recent Shovel Knight, and of course, the Souls series. Similar to the latter, there is a light lore component in Foregone. In essence, leftover writings can be found throughout the world in the form of collectibles. Like a lot of games that try to ape the Souls-like idea of throwing around lore randomly, it doesn’t work particularly well. Much of Foregone is unknown at first, but there’s also little reason to pursue more information. It might work for some, but it certainly didn’t for me.

It’s clear that Foregone struggles to define itself within the genre on a surface level. In practice, however, the complementary elements and design choices mesh in a way that makes it feel quite unique. It is unlikely to evoke passion from those who already dislike the genre, but there is enough value to justify giving it a shot simply for the fluidity of its gameplay.